S593 Not for Me! Senator Kamala Harris Sponsors Bill That Would Gut Religious Exemptions 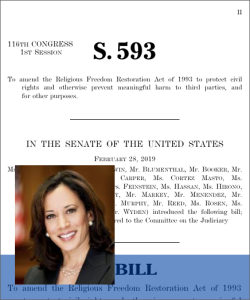 Sen. Kamala Harris has a bill that threatens religious exemptions from vaccine mandates to attend school in every state. The “Do No Harm Act,” Senate Bill S. 593. prohibits people from refusing to comply with a law, regulation or policy because it would violate their religious beliefs. If passed it could be used in court to argue that exercising a religious exemption from vaccine mandates exposes other people to potential harm and “discriminates” against them. And if it can be used this way you know it will. It guts the First Amendment right to the free exercise of religion.

“The Do No Harm Act clarifies that the Religious Freedom Restoration Act is intended to protect religious freedom without allowing the infliction of harm on other people. It would amend RFRA in order to restore the original intent of the legislation by specifically exempting areas of law where RFRA has been used to bypass federal protections. Source: Human Rights Campaign.org” That’s the loophole in play, if you or I use the religious exemption to refuse a vaccine, the argument will be that we can not, because refusal will inflict harm on other people. The slope has been greased and you’re being pushed.

Click HERE to send a letter to your representatives. It’s easy, when you fill in your address, the system generates the letter for your location. You can use the stock letter provided, but we suggest you personalize the intro paragraph to share your unique point of view.  I just sent mine – Kim

This bill prohibits the application of the Religious Freedom Restoration Act of 1993 (RFRA) to specified federal laws or the implementation of such laws. Currently, RFRA prohibits the government from substantially burdening a person’s exercise of religion even if the burden results from a rule of general applicability, except in furtherance of a compelling governmental interest when using the least restrictive means.

Under the bill, RFRA is inapplicable to laws or the implementation of laws that protect against discrimination or the promotion of equal opportunity (e.g., the Civil Rights Act of 1964);
require employers to provide wages, other compensation, or benefits, including leave;
protect collective activity in the workplace;
protect against child labor, abuse, or exploitation; or
provide for access to, information about, referrals for, provision of, or coverage for, any health care item or service.

The bill prevents RFRA from being used to deny (1) goods or services the government has contracted, granted, or made an agreement to provide to a beneficiary; or (2) a person’s full and equal enjoyment of a government-provided good, service, benefit, facility, privilege, advantage, or accommodation.

In order for a person to assert a RFRA claim or defense in a judicial proceeding, the government must be a party to the proceeding.