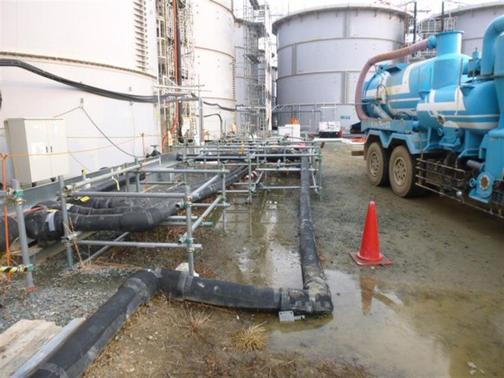 (Reuters) – The operator of Japan’s Fukushima nuclear plant said on Thursday that 100 metric tons of highly contaminated water had leaked out of a tank, the worst incident since last August, when a series of radioactive water leaks sparked international alarm.

Tokyo Electric Power Co told reporters the latest leak was unlikely to have reached the ocean. But news of the leak at the site, devastated by a 2011 earthquake and tsunami, further undercut public trust in a utility rocked by a string of mishaps and disclosure issues.

“We are taking various measures, but we apologize for worrying the public with such a leak,” said Masayuki Ono, a spokesman for the utility, also known as Tepco.

“Water is unlikely to have reached the ocean as there is no drainage in that tank area.”

Tepco said water overflowed from a large storage tank at the site late on Wednesday after a valve had remained open by mistake and sent too much contaminated water into a separate holding area.

A worker patrolling the area, around 700 meters from the ocean, spotted drips of water leaking through a drain attached to the side of the tank.

The utility has been harshly criticized for its response to the three nuclear meltdowns following the quake and tsunami at the plant, 220 km (130 miles) north of Tokyo.

A nuclear regulatory official last week said Tepco delayed release of record-high measurements of strontium-90 in groundwater despite repeated requests by the regulator.

Initial measurements of the latest incident showed the leaked water had a reading of 230 million becquerels per liter of beta-emitting radioactive isotopes, including strontium 90.

That level is almost equal to that recorded in last year’s leak of 300 metric tons of contaminated water, deemed a “serious incident”, or level three, on the seven-point international scale for radiological releases.

The legal limit for releasing strontium 90 into the ocean is 30 becquerels per liter.