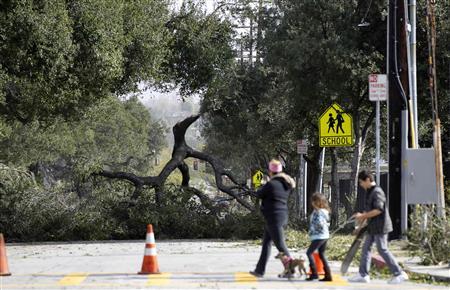 (Reuters) – A powerful wind storm with gale-force gusts left much of the Los Angeles area strewn with toppled trees and downed power lines on Thursday, slowing rush-hour traffic and knocking out electricity to over 300,000 customers.

Utility crews were out in force, working to restore electricity and remove uprooted trees and fallen limbs that littered neighborhoods throughout the region, blocking streets in many places.

Authorities said at least one house in Los Angeles, and an apartment building and gas station in Pasadena were hit by fallen trees, but no one was reported hurt.

Janelle Brown, 38, said the house she and her husband moved into a week ago in Los Angeles’s Silver Lake neighborhood, narrowly escaped a direct hit from a large 100-year-old pepper tree that was uprooted in the middle of their backyard overnight.

“We woke up this morning, looked out the window, and realized it was gone,” she told Reuters, adding she and her husband never heard it fall.

“We lay in bed until 1:30 in the morning listening to the cracks and the pops and the wind rattling the windows, and then finally fell asleep,” she said.

Brown, a novelist, said some branches from the tree came to rest on top of her house, and “there’s a little bowing in the roof, but from what we can tell, we got lucky.”

Public schools in Pasadena and 11 other districts in San Gabriel Valley, northeast of Los Angeles, were closed for the day, though the Los Angeles Unified School District said it would remain open.

The Los Angeles Department of Water and Power, the nation’s largest public utility, reported nearly 129,000 of its customers were without electricity Thursday morning.

Southern California Edison, which serves areas outside the city of Los Angeles, said outages that began Wednesday night had affected more than 213,000 homes and businesses.

Winds gusting to speeds ranging from 40 to 60 miles per hour and higher were clocked throughout the Los Angeles area starting Wednesday night and through the early morning hours of Thursday, according to the National Weather Service.

Gusts of 97 miles per hour were recorded overnight at Whitaker Peak in the San Gabriel Mountains.

The winds had largely died down by daybreak, but forecasters said blustery weather was expected to return, with sustained winds ranging from 45 to 60 miles per hour and gusts of up to 85 possible through Friday.

The Weather Service said the wind storm was produced by the combination of a low-pressure system that materialized over the California-Nevada border area and a zone of surface-high pressure originating in the Great Basin.

The advent of high winds put fire departments throughout the region on alert for a high risk of wildfires.