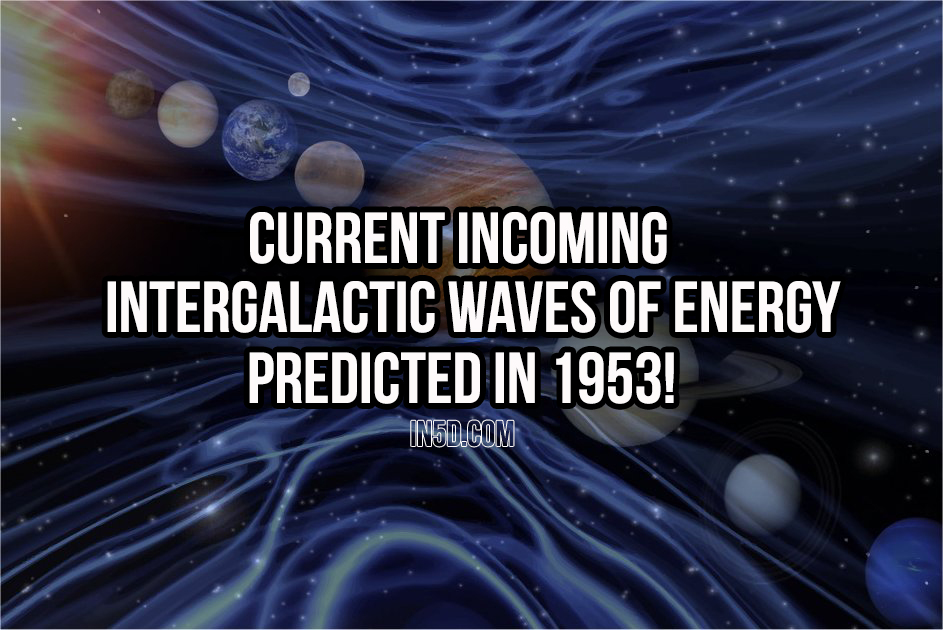 In a 1953 book entitled, “Other Tongues, Other Flesh

made some pretty astonishing revelations about what is happening currently to our planet regarding the influx of intergalactic waves of energy.

The following is an excerpt from this book:

Dr. Schein believes that maybe all of the cosmic radiation bombarding the Earth comes from outside of our Solar System. However, it appears that nearly all cosmic rays come from our own Sun–the only rays coming from outside of our System are possibly those consisting of high energy particles. The fact that too many electrons are showering down on us and present theories won’t account for them and the fact that certain cosmic rays bombard the Earth from outside our own Solar System tends to support the idea that our entire Solar System is entering a new possibility area of the Universe. Every phase of Earth life will be greatly influenced–Economics, Religion, Education, Politics, Science, Social life, Medicine, Eating habits, etc. Virtually everything will change, and for the better!

In a lecture given by Williamson in 1954, he stated:

They say that our entire solar system is moving into a new area of the universe and that cosmic ray bombardment will increase at a fast rate. Recently a very famous American physicist announced to the scientific world that the electron count has speeded up and that the cosmic ray bombardment was increasing at a tremendous rate and that present theories would not account for it in any way. He was very alarmed. His work did not get into the newspapers. It did appear in a few scientific journals and was immediately hushed up. But, if you look in some of the back issues of Science News Letter you will find the facts. The space people told us about this even before it was announced.

The space people said that as we move into this new area of the universe there are going to be some very strange things take place on the physical, mental and spiritual planes. Peoples’ minds are going to change for one thing. Also, there will be tornadoes and earthquakes. Volcanoes that have never been active in recent history will become active and erupt.

They also told us that under the new cosmic ray bombardment all falsity and hoaxes will pass away. We will not have to wonder, is this or that true. We will know! This is one of the mental changes that will come about.

The unprecedented earth changes have been well documented recently. Volcanic activity, alone, has increased 500%.  For example, Mount Hakone hasn’t erupted in over 800 years:

Dramatic climate changes have been noted throughout our solar system as well.  Additional notations provided by David Wilcock on GaiamTV:

Sun: The Sun is the center of our Solar System, and all life that is on this Earth came from the Sun. If there were no Sun, we would not be alive. This is simply scientific fact. And so any changes that occur in or on the Sun will eventually affect every person alive. The solar activity is the highest recorded in the past 8,000 years.

We know that the Sun’s magnetic field has changed in the last 100 years. There’s a study by Dr. Mike Lockwood from Rutherford Appleton National Laboratories, in California. Dr. Lockwood has been investigating the Sun, and reports that since 1901 the overall magnetic field of the Sun has become stronger by 230 percent.

Moon: Earth’s moon is growing an atmosphere . Around the moon, there is this 6,000- kilometer- deep layer of Natrium that wasn’t there before.

Jupiter: Over 200% increase in brightness of surrounding plasma clouds.(Huge belts in the giant planet’s atmosphere have changed color, radiation hotspots have faded and flared up again, and cloud levels have thickened and dissolved, all while space rocks have been hurtling into it the gas giant.) Plasma torus not seen before 1974.  Raging red thunderstorms beginning in 2008. The moon closest to Jupiter, Io, experienced 1000% increase in its ionosphere between 1973-96. Io’s surface became over 200% hotter between 1979-98. The moon, Europa, Is literally glowing since 2003.  The moon Ganymede is 200% brighter as noticed between 1979-95 while its atmosphere became 1000% denser.

Saturn: Major decrease in equatorial jet stream velocities in only 30 years, accompanied by surprising surge of X-rays from equator.  Saturn grew a plasma torus which became enlarged by 1000% between 1981-93. A new and larger plasma torus has just been discovered as well.  An aurorae appeared in Saturn’s polar regions in 1995.  In 2004, massive x-ray emissions were also detected near the equator at the 19.5 degree point. In 2011, a massive solar storm encompassed much of Saturn’s northern hemisphere, causing an “unbelievable” temperature spike.  Additionally, Saturn has 100x more ethylene gas than previously thought possible.

Pluto: 300% increase in atmospheric pressure, even as Pluto recedes farther from the Sun.

Earth: Substantial and obvious world-wide weather and geophysical changes. Earth’s Axis has changed. On Earth, the overall volcanic activity increased 500 percent from 1875 to 1975, while the earthquake activity has increased by 400 percent since 1973. Dr. Dmitriev says that comparing the years 1963 to 1993, the overall number of natural disasters — hurricanes, typhoons, mud slides, tidal waves, etc. — has increased by 410 percent.

Additionally, MANY people have noticed a significant change in the color of the sun, which has gone from an egg yolk yellow to a bright white light.

According to Dr. Simon Atkins, CERN is being used to prevent these incoming energies from arriving, adding that no matter what they try, it will not prevent these waves of intergalactic energy from transforming our entire solar system. He talks about this around the 1:09:20 marker of the following video:

Regarding Williamson’s remarks in the 1950’s, we have since seen a number of events and incidents that have corroborated his material.

For example, in 1952, there was a mass UFO sighting over the White House in the United States, showing how our extraterrestrial neighbors have been ready for an official “First Contact” for over 60 years.

In the 1960’s, we witnessed an incredible shift in consciousness through the peace and love movement that culminated in 1967 during the “Summer of Love”.

In 1987, the Harmonic Convergence brought together tens of thousands of people who helped to usher in these new energies.

While the Harmonic Convergence may seem “New Agey” to some, please keep in mind that we did not have access to material about some of the New Age practices and the channelings of some archontic entities.  It is my firm belief that the Harmonic Convergence was done with honest intentions and greatly magnified the current spiritual movement to where it is today.

2012 marked the end of the Mayan Calendar as well as the completion of the 25,772 year cycle known as the Precession of the Equinoxes.

While some people have stated, “nothing happened” in 2012, MANY others have either witnessed or experienced nominal societal and spiritual changes on the micro and macro levels. These changes could very well be attributed to the incoming intergalactic waves of energy that have been transforming our entire solar system.

The proof is all around us, literally! Massive changes are happening to those who have the eyes to see them. Even the scholars who rely on empirical data cannot deny the interplanetary climate changes that not only affect our solar system, but us, as individuals.

Just about everyone within this genre can literally feel as though we’re on the verge of something truly incredible, despite those in power trying to keep us living in subservience, control, and conformity through tyrannical and oppressive measures.

Some people, such as Dr. Simon Atkins, believe that this year is the year that the intergalactic wave of energy begins to transform humanity, while others have predicted 2017 as the year of consciousness transformation.

Personally, I cannot place a specific date on any of this. What my own discernment is telling me is that whatever changes are to come, they’re already happening. In my heart, I hope a complete transformation of consciousness happens in the literal blink of an eye, but my gut is telling me that it is like the change of seasons. It’s already begun and will continue to get stronger as each day passes.

What I HOPE for is that we all become light beings or move into a higher dimension of consciousness. In the meanwhile, I can envision a world without the need for economic subservience and hatred toward other countries, as well as towards ourselves… where governments are no longer needed as a “Council of Elders” will work in humanity’s best interests. In this world, all suppressed technologies are revealed and catapult us into a way of living that will make today’s standards look like the Stone Age.

Is any of this possible? YES, ALL of it is!

What do YOU think?